The creators of animation comedy “Beached Az” prove that little fish can lure the big bites in film production.

The Sydney mates who perfected the art of mocking New Zealanders in their animation comedy Beached Az have been hit with a wave of business opportunities after their video on YouTube attracted more than six million hits.

It’s been two years since Anthony MacFarlane, Jarod Green and Nick Boshier – all 29 – spent $16 on their first episode about a whale who becomes stranded on a beach in New Zealand and meets creatures including a curious seagull, a nudist sea slug and a break dancing crab.

"The three of us wanted to get together and create stuff and just get it out there. We all wanted to be filmmakers of some description," MacFarlane says.

The collaboration began in 2008 when MacFarlane (seagull voice) and Boshier (whale voice) were sharing a house and running their separate video production businesses from their lounge room.

"When you know someone that well, you go off on tangents and no one else knows what the hell you’re talking about," MacFarlane says.

They recorded their impromptu dialogue with a cheap handycam and a few days later, one of their mates Green (the artist) added the animation and they posted it on YouTube and Facebook.

Now the trio, who have formed the Handsomity Institute, are enjoying a torrent of income opportunities despite their nontraditional approach – free sharing of their product.

It wasn’t until Beached Az reached one million hits on YouTube that they started to think about how to monetise the huge volume of viewers. 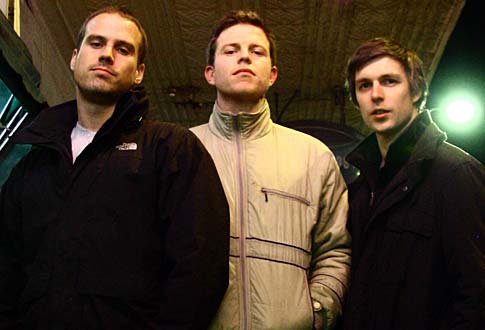 "We started looking at ways of making some cash off these people who are watching it, engaging with it and passing it on. That’s when we started an online store."

Beached Az soon surfaced on t-shirts and boxer shorts, extending the brand off the screen.

"It’s a great way to make money through merchandise. It’s straight into your pocket – no other cuts going out," MacFarlane says.

"Off the back of that we were creating this brand, not just content."

Women’s clothing retailer Supré then jumped aboard and sold $1.4 million worth of t-shirts, creating its first ever men’s range in the process.

"It was incredible to watch it explode," MacFarlane says. "That’s when we went to the ABC and took it to the next level."

All 21 episodes of Beached Az have aired on ABC1 and ABC2 and will be released on DVD in ABC stores next month.

The guys also created a game and an iPhone app. Green recently flew to Cannes to explore international markets.

While there has been plenty of success, The Handsomity Institute has been faced with some difficult decisions about where and how they expose the Beached Az brand.

Greenpeace and a production company for The Apprentice in New Zealand have made requests.

"We get offers all the time from advertising companies. They’ve come in a bunch and it’s such a hard balance because cash is cash," MacFarlane says.

"If we don’t have cash we can’t keep doing what we love and we’d have to go back to our sh—y jobs. All of a sudden we have a business position, we have a budget and people are waiting for a result," he says. "It’s definitely a business and we have to make business decisions."

Cash has also meant better production values. The next 10 episodes will use more advanced 3D software and take about four months to complete but the collaborators don’t want to lose their original creative spontaneity.

"You can get so caught up in hoping you’re original that sometimes you lose what’s funny," MacFarlane says.

"If we try and think too hard about it, it won’t work. When we sit in a room and try and write, we’ll scrap it every time."

None of the Sydney mates had been to New Zealand when they crafted the first episode but their exaggerated "beached ez bro" Kiwi accents went viral.

A New Zealander living in Australia commented on the Beached Az YouTube page "before I arrived I would have said we don’t talk like this! Now every time I hear a Kiwi talk I cringe".

"The accents in Beached Az are over the top but its still pretty close to reality," SushiTrain09 posted.

MacFarlane says one of the most difficult aspects of keeping the brand alive is avoiding predictability.

"If we keep asking for a chip, it’s not going to be any funnier," he says.

"But if we’ve drunk too much coffee or doing whatever and we all laugh, that always works. We just have to go back to random and fun and if we giggle during a take that’s what makes it."